On Tuesday night, President Trump announced his nominee for the US Supreme Court vacancy, a seemingly well-qualified and respected judge named Neil Gorsuch.

NOTE: This blog will not get partisan, and will in general leave political analysis, opinions, and predictions about Judge Gorsuch and his path to confirmation to other more qualified and topical outlets.

But it’s with sadness that I have to share that Americans, and our rights regarding the Right to Die, are definitely at risk if Judge Gorsuch is confirmed. 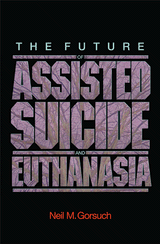 Judge Gorsuch is the author of the above, The Future of Assisted Suicide and Euthanasia, a 2009 publication in which he argues against the practice from both a moral and legal standpoint.

From the opening pages of his book:

Gorsuch builds a nuanced, novel, and powerful moral and legal argument against legalization, one based on a principle that, surprisingly, has largely been overlooked in the debate–the idea that human life is intrinsically valuable and that intentional killing is always wrong. At the same time, the argument Gorsuch develops leaves wide latitude for individual patient autonomy and the refusal of unwanted medical treatment and life-sustaining care, permitting intervention only in cases where an intention to kill is present.

It appears, if Judge Gorsuch is confirmed, that our Death with Dignity advocates will have their work cut out for them.  I can only hope that the reported “wide latitude for individual patient autonomy” does indeed exist, and guides his thinking in deciding case law about this human right.